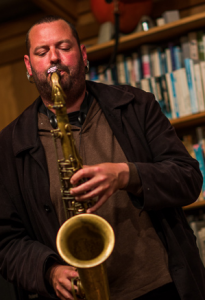 “There is a great energy in Berkeley, a vibrancy…It’s small-town cosmopolitan.” 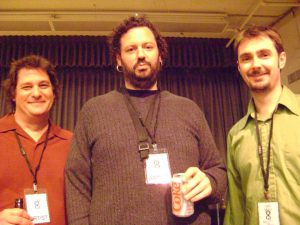 You’ve been a fixture in Downtown Berkeley for quite a few years now.  How did you get started and how would you describe your playing style?
After I left San Diego State, where I was studying Jazz performance and composition and doing extensive studio work in LA, I ended up at Sonoma State. While I was there I began studying and playing with the saxophonist Marco Eneidi. He had come back to finish his degree after having spent 20 years in New York playing with Cecil Taylor and William Parker. Studying with Marco altered the trajectory of my life and music. I had no more interest in straight ahead Jazz. I then ended up playing and studying with the master percussionist, Spirit. He’s a master of polyrhythmic and multiple independent pulse playing.

My music is a lot of things. It’s postmodern, based in an expression of energy. It’s no longer Jazz, but what it is I don’t know. It’s New Music. A terrible label, but it is what it is.

“My music is a lot of things. It’s postmodern, based in an expression of energy.”

When we met we talked a little bit about your influences. If you were to pick 4 albums that you’re influenced by the most, what would they be and why?

I have tons of influences from Jazz, and both modern and postmodern classical music, but four albums do come to mind in the formation of my music as an adult around my 24th birthday.

#1 The Dried Rat Dog A duo with saxophonist Peter Brotzmann and drummer Hamid Drake. It was my first Brotzmann record. His intensity and brutal multi phonics blew my mind.
#2 Bill Dixon’s Vade Macum Bassists William Parker and Barry Guy, and drummer Tony Oxley. It blew everyone’s mind when it came out in 96.
#3 The Evan Parker Trio Live At The Vortex Evan Parker is an English saxophonist. He expanded the language of improvisation and the saxophone, so it no longer fit into the realm of Jazz.
#4 Cecil Taylor’s Silent Tongues His solo album live at Montreux. His cell structure compositions are the most important step in improvisation in the 2nd half of the 20th century, and it was my intro to understanding his concepts. I would eventually tour with him. 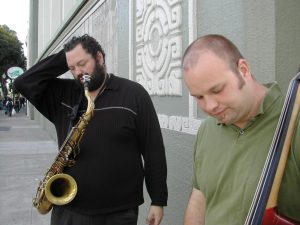 Photo featuring Joshua and bass accompanist on corner of Kittredge and Shattuck.

Joshua Allen in his element.

You mentioned that when you play on the street, you aren’t playing actual compositions, but instead you’re just practicing.  Is practicing in public part of your process? Why not play compositions? How long have you been playing in Downtown Berkeley?

I started playing on the streets because I was no longer interested in doing Jazz casuals. The compositions that I wanted to practice were rather obscure like Monk, Mingus, Wayne Shorter, Ornette Coleman, or polytonal Coltrane neo bebop tunes.

I found that playing on the streets was like lifting weights for the saxophone. When I play Free Jazz and energy based music I find that it makes me incredibly strong and relaxed.

I am practicing compositions, but I’m not playing my music. I use the aforementioned obscure tunes to help craft my melodic language. I also create and practice tone rows and practice them. I play them forward, backwards, inverted, then backwards inverted. I play them in all twelve (keys is a a gross word for it) starting points.  I string them together. One phrase gets you four phrases gets you 48 phrases. That’s the starting point for countless possibilities. I also practice my orchestra music and music for small ensembles using this approach. I never run out of material to practice. My music has so much to do with the timbres and overtone series of the saxophone. It’s the start of approaching the saxophone with extended technique. Multiple sounds, multiple structures simultaneously. It just doesn’t work using this approach outside on the streets.

What are some upcoming shows we should be looking out for? How can sax lovers learn more about you?

I’m taking time off to help my mother. She has cancer, and has been going through chemotherapy. My next big show is at Studio Grand in Oakland on February 5th. I’m playing with my quartet, The Deconstruction of What You Know with Henry Kaiser on guitar, and William Winant and Aaron Levin on drums! Henry and William are two of the most important improvising musicians of their generation. They are a joy to play with. Hopefully my 23-piece Deconstruction Orchestra, and bookings for my solo performance will be forth coming. My solo performance is like nothing you hear me practice on the streets. You can find and my music page on Facebook, Joshua Allen, Berkeley CA. You can also find me on Bayimproviser.com. 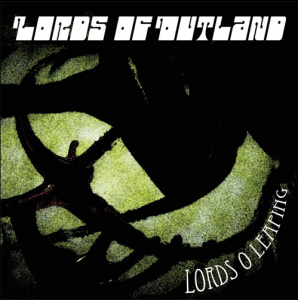 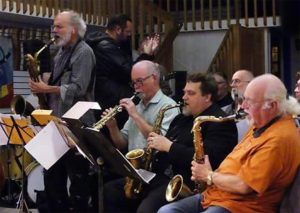 Featured here: Joshua with members of his 23 Piece Deconstruction Orchestra.

What do you love about Downtown Berkeley?

Berkeley is my home. I grew up here. I’m always surrounded by people I’ve known all my life. I can also hide in plain site. There is a great energy in Berkeley, a vibrancy… It’s small-town cosmopolitan.

Check out below to see and hear Joshua’s Deconstruction Orchestra in action.

Missed a spotlight? Check out our Spotlight Archive.